The ultimate theme park with something for everyone. Disney World covers more than 27,000 acres and has 4 theme parks, 2 water parks, 4 golf courses, a camping resort and a shopping district!

Magic Kingdom: The first and original theme park to open in the complex on 1 October 1971. As well as the fantastic Main Street U.S.A. and Liberty Square, there are 4 land; Fantasyland, Frontierland, Adventureland and Tomorrowland and all accessible by the Walt Disney World Railroad that runs round the perimeter of the park.

Animal Kingdom: One of the largest animal theme parks in the world home to more than 1,700 animals across 250 species. The park reflects Disney's dedication to conservation and is committed to animal care, education and research. As well as 6 captivating lands to explore there is the Kilimanjaro Safari, the gushing Kali River Rapids and the thrill of Expedition Everest - Legend of the Forbidden Mountain.

Disney's Hollywood Studios: A theme park dedicated to show business drawing inspiration from the heyday of Hollywood in the 1930's and 40's. Movie magic comes to life and you can step into the action with attractions based on blockbuster movies and TV shows. As well as all the showbiz delights there is the thrill of the Rock 'n' Roller Coaster where you get to blast through the darkened freeways in a stretch limo to the rocking sound of Aerosmith.

All the Walt Disney World Parks are about a 20 minutes drive from Providence.

Typhoon Lagoon: After an epic typhoon hit Mount Mayday throwing surfboards into the palm trees and boats into the air a topsy-turvy water filled adventure was created. You can plunge down rapids, glide down the lazy river on a relaxing raft ride or just chill out and sunbathe on the sandy beach. Fancy getting close to the sea creatures - snorkel with sharks, stingrays and tropical fish in the coral reef.

Blizzard Beach: Here you can enjoy frosty fun. This one-time ski resort has melted into a watery wonderland. Mount Gushmore has one of the world's tallest and fastest waterslides or as a real contrast float down the tranquil river or sunbathe on the white-sand beach.

Both parks are about a 15-20 minutes drive from Providence

Islands of Adventure is right next door to Universal Studios and takes you on an unforgettable journey of the world's most cutting edge rides, shows and interactive attractions bringing your favourite stories, myths, cartoons, comic books and children's tales to life. Take the Forbidden Journey with Harry Potter, a river adventure through Jurassic Park, ride the Incredible Hulk Coaster or try to find your way out of the Lost Continent.

Universal is about a 25 - 30 minutes drive from Providence

Busch Gardens Tampa is a 335 acre 19th century African-themed animal theme park. The 29 acre Serengeti Plains allows animals to roam freely and encompasses a fantastic safari tour that evens lets you feed the giraffes. The beauty of Busch Gardens is that it is so diverse, from being able to get up close and personal with the animals to hair-raising rides such as SheiKra - climb 200 feet to the edge of a 90 degree drop that inches you mercilessly over the edge and stops, then hurtle downwards at 70 mph through loops, underground tunnels then a splashdown finale. If that's not enough of an adrenaline rush take the Cheetah Hunt, the triple-launch coaster and park's longest ride at 4,400 feet

Busch Gardens is around a 75 minutes drive from Providence

SeaWorld has something for everyone. From some of the world's top rated roller coasters to action packed live shows to up close animal interactions. Enjoy shows such as One Ocean featuring killer whales, Blue Horizons with dolphins, tropical birds and acrobats and Clyde and Seamore the Sea Lions back at school. If you want more thrills and adrenalin rushes, try Manta - the only flying roller coaster of it's kind in the world, find out what it's like to spin, glide, skim and fly like a giant ray. Dare you ride the Kraken - consistently ranked as one of the world's top coasters by enthusiasts. The floorless coaster takes you on an incredible journey high above the horizon, dropping you longer and spiralling you faster than any other coaster in Orlando - beware when you wake the Kraken!

SeaWorld is about a 25 minutes drive from Providence

Discovery Cove lets you swim and snorkel with dolphins at this all-inclusive day resort that is limited to around 1,000 guests per day. The 30 minute swim with bottlenose dolphins is undoubtedly the major attraction and an unforgettable experience, however there is plenty more to this resort. There is an underwater walking tour through the Grand Reef, you can snorkel with exotic fish, walk through the Explorers Aviary with hundreds of tropical birds. Why not just relax on the wind-away river or in one of the hammocks with a cool tropical drink.

Discovery Cove is about a 25 minutes drive from Providence

Aquatica is regarded as one of the best water parks in Orlando for families as it is suitable for all ages. The resort has a South Seas vibe with 36 slides and six winding rivers. The main attraction is Dolphin Plunge featuring side by side body slides that shoot riders through a pool filled with black and white Commerson's dolphins.

Aquatica is around a 25 minutes drive from Providence 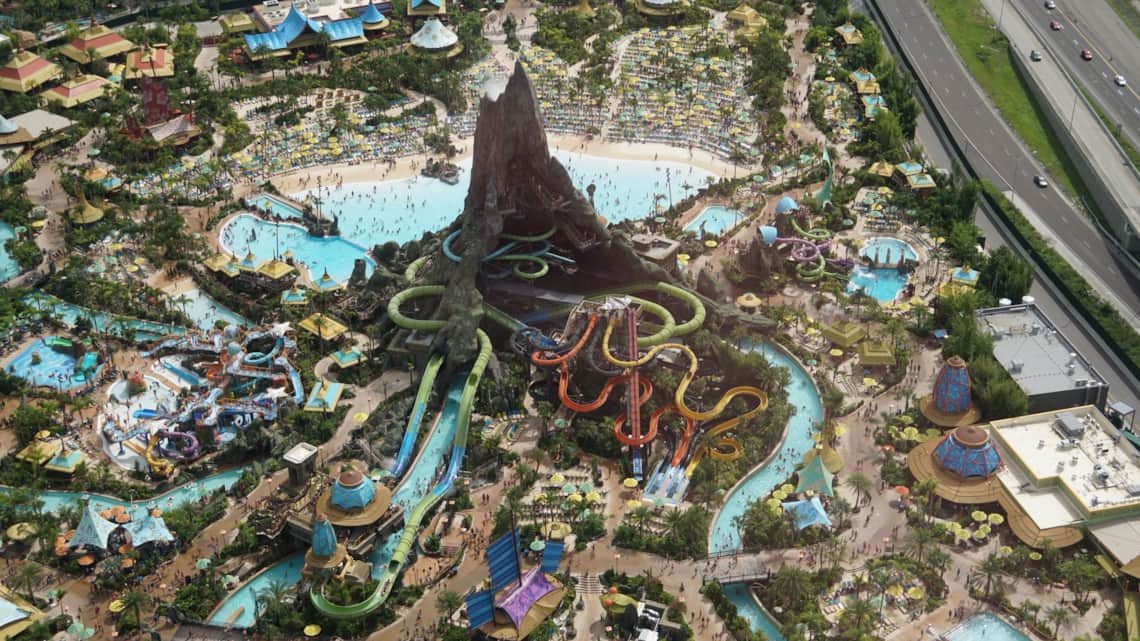 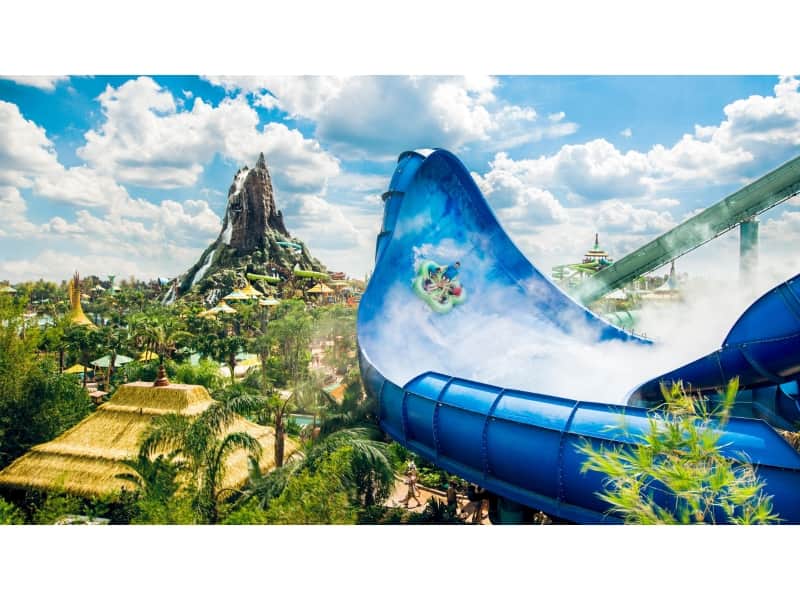 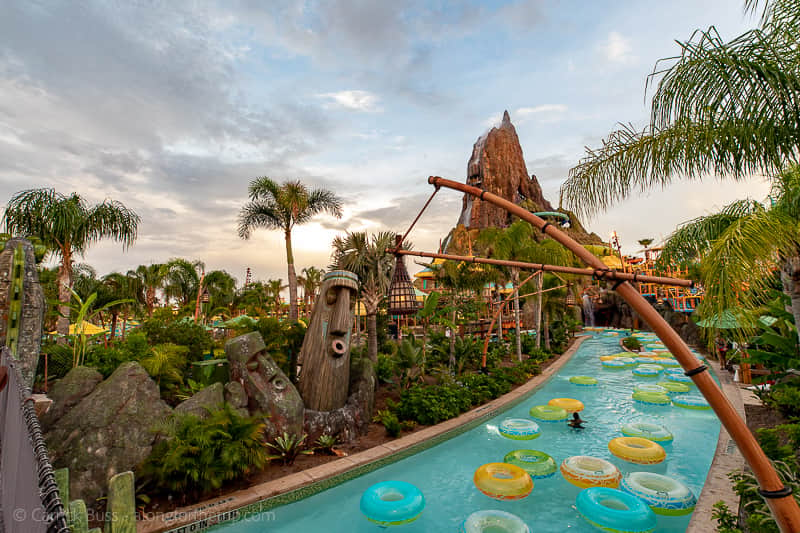 Universal's Volcano Bay opened in May 2017 and was the replacement for Wet 'n Wild and is themed around a 200 foot volcano named "Krakatau". The volcano houses three water slides Ko'okiri Body Plunge, the tallest body slide in America ranging at 125 feet tall, and also the first to travel through a pool full of guests. Krakatau also holds the Kala & Tai Nui Serpentine Body Slides which travel throughout the midst of the volcano winding around the Krakatau Aqua Coaster.

The park utilises the TapuTapu experience. TapuTapu is a wristband wearable distributed at the entrance at the park, which can be used to hold one's place in line instead of standing in long queues for attractions. TapuTapu comes with other features including TapTuPay, which links a credit card through the Universal Orlando app to the wearable, allowing users to pay throughout the park for merchandise, food, and drinks (alcoholic drinks require a government issued ID). The wristbands can be used to interact with environmental features, set off water springs, or illuminate lights.

Gatorland: Step through the jaws of the entrance into the "Alligator Capital of the World". 110 acres of theme park and wildlife reserve located along South Orange Blossom Trail, combining "Old Florida" charm with exciting new exhibits and entertainment. The park has the free-flight aviary, petting zoo, one of a kind animal shows, natural alligator breeding ground and the thrilling Screaming Gator Zip Line as well as being home to the extremely rare white alligators.

Gatorland is around a 25 minutes drive from Providence

LEGOLAND is specifically aimed at families with children ages 2 - 12. The park has more than 50 rides, attractions and shows, life size LEGO displays and interactive fun for the whole family to enjoy. There are also restaurants, shopping and a breathtaking botanical garden as well as the LEGOLAND water park. The water park features a wave pool, Build-A-Raft lazy river, body slides, tube slides and an interactive water play all based on the popular DUPLO Safari product range. It is situated in Winter Haven which is about 45 minutes South West from the Orlando theme parks.

LEGOLAND is around a 30 minutes drive from Providence

Loading...
Upps!
You're running a web browser we don't fully support. Please upgrade it for a better experience.
Our site works best with Google Chrome.
How to upgrade the browser